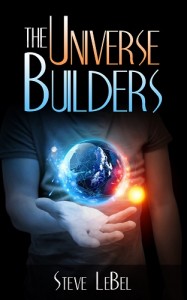 This is a tale of gods and goddesses and the universes they build.  It is a story from The Universe Builders, where it all began…

This humorous fantasy focuses on a young god named Bernie, who just graduated from God School.  He’s been given his dream job: he’s a builder, a creator of universes.  His first assignment is to build his very own universe.  Unfortunately, our hero runs into problems from a vengeful co-worker, a boss who is out to fire him, and more than a few problems of his own making.

Let’s introduce you to some of the gods in our story.

This is our hero.  Some people think Bernie spent too much time studying to be a builder and not nearly enough time learning about the real world.  He had quite a few problems in school as he tried to master the science and art of universe building.  Some problems came from his tendency to try too hard, but most of them came from not doing enough planning before he started creating things.  After all, building a universe is very complicated, and if you haven’t planned where you want to go before you start, just imagine all the places you can end up – especially if you have the power to create universes.

In his defense, Bernie’s had a tough life.  His parents divorced when he was young, so he didn’t have all the advantages the other kids had.  Bernie’s dad was a famous universe builder, but as soon as he became famous, he left the family behind, which is why Bernie grew up on the poor side of town.  Our hero worked hard, graduated from school, and landed the best job in the world.  Now he must build his own universe, but not just any universe – it has to be a great one.  If he doesn’t, it will cost him far more than just his job.

This young goddess is Suzie.  She and Bernie have been friends and classmates for a long time.  She decided years ago Bernie needed looking after, which has kept her busy for most of the time she’s known him.  Suzie works in the personnel department of the company where Bernie works.  It’s a good thing because he needs all the help he can get.

Suzie likes Bernie, which is obvious to everyone, except, of course, Bernie.  She would like to get closer, but she is afraid of chasing him away, so she contents herself with being pals.  She is always there to offer help and support.  Maybe some day Bernie will appreciate her as more than just a friend.

Lenny and Bernie have become best buds.  Lenny has more experience than our hero, because he is a year older, and he comes from a good two-builder family, where both his mom and his dad were builders.

Lenny and Bernie met in an after-school club called the Off-World Technology Group.  They were fascinated by the cool things people have invented in other universes.  They like to swap some of the interesting gadgets they found.

Lenny is convinced he can exert more control over his personal world through the use of charms and talismans from other universes.  After all, magic is just science we don’t understand yet.  Right? 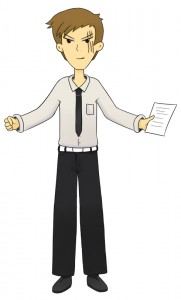 This is Billy.  Billy is not a nice boy.  He was the school bully, and he never liked Bernie.  It began because Billy didn’t like the attention Bernie got when the kids found out his dad was a famous builder.  Billy used to do everything he could to put Bernie down.  After being put down for so long, even Bernie began to question his abilities.

Billy works for the same company as our hero.  Whenever he has a chance, he sabotages Bernie’s world in the hope of getting him fired.  Bernie’s planet is looking worse and worse all the time.  How many more asteroids and tidal waves and earthquakes can it take?

Join Bernie and his friends as he struggles to build a great universe and keep his job.  Prepare for unusual twists and turns even a universe builder could not have foreseen.

The ebook is now available at Amazon.com and the print book will be available by August 1st.

Please visit The Universe Builders (www.TheUniverseBuilders.com) for more info on Bernie and his friends.