Keith Anderson is the one who took my fascination with carbide tin cans and elevated it to the level of rocketry.  I think we were 11 or 12 at the time.  He said he heard from a kid that you could make rocket fuel just by cutting off a bunch of match heads.  An intriguing concept to be sure, but my initial lab work to test the concept was not particularly successful.  Lots of matches were hard to come by, especially without raising adult questions.  There are only so many times I can justify lighting the little alcohol lamp that came with my chemistry set.  So, unfortunately, we had to abandon that line of research.

More inquiries turned up rumors that rocket fuel could be made with some sort of charcoal and sulphur and saltpetre combination.  Closer scrutiny cast some doubt on this, however.  Saltpetre was used by farmers for some reason we couldn’t seem to understand.  It was also (according to a friend’s older brother) used by the military to keep their soldiers from having a good time – whatever the heck that meant.  How could anything like that be used for rocket fuel? 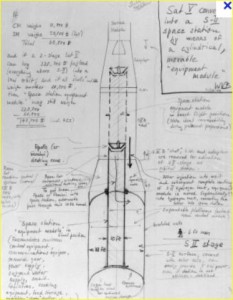 This is when I realized we might need to go to the library to find out more.  I found a book by a guy named Goddard who made some early rockets.  It had to be a good book because they said he was the Father of Rocketry right on the front cover.  One of the first fuels he experimented with was saltpetre mixed with sugar.  Eventually, he went on to use liquid oxygen and stuff like that.  I decided to give the saltpetre another look because they talked about it in the first couple of chapters of the book.  The beginning of the book was the easiest to understand, although each new chapter kept adding more drawings and formulas and diagrams and complicated stuff.  Sticking to the first chapter would make things much easier.  I admit the saltpetre and sugar didn’t really sound plausible, but the guy had written it in a book, so it had to be right.

The next part of my plan was more complicated.  How would I get my mom to help me acquire the saltpetre I needed?  What if she asked me what I wanted it for?  Would she accept that “I need it for a chemistry experiment.”  I doubted it.  She had a sharp and suspicious mind when it came to mysterious and smelly things coming from the basement.  But, I took a chance, and after several days of nagging, she agreed to take me to a feed store.

The store smelled like a barn, but we found what we were looking for.  In fact, they were selling it by the scoop.  You just shovel how much you want into a bag.  I’d hoped to get enough to fill a small bottle from my chemistry set.  Instead, I came home with an unending supply.

Eager to begin my experiments, I went to my basement lab with my book and my new loot.  I had to make a quick run back upstairs for a supply of sugar.  Mom gave me some, although she questioned why I needed so much.  I carefully mixed the sugar and the saltpetre together in the recommended ratio.  I read the mixture had to be heated, and, if you did it right, it would turn into a liquid.  They did say you shouldn’t let the temperature get above something like 325 degrees or something called “combustion” might happen.  But that didn’t matter to me, because 1) I didn’t have any way of measuring the temperature, 2) I didn’t know what 325 degrees were, and 3) what the heck was “combustion” anyway?

Reality can be a harsh teacher.  Laws of Chemistry, I found, just hate to be ignored.

My little alcohol lamp was merrily heating the stuff in my test tube.  And, it actually was turning into a liquid, just like the book said it would.  Now at this point, you might think I should have known what to do next.  But the book was kinda sketchy on that part.   So I hadn’t really thought about what might come next.  When the liquid in the test tube started boiling, all I was really thinking about was the interesting thick bubbles that were forming.  Which is probably why I wasn’t expecting the explosion. 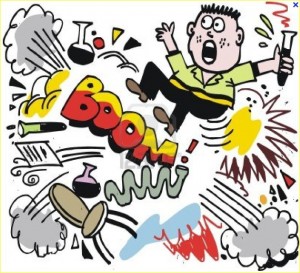 On the scale of explosions, it wouldn’t be considered a huge explosion.  In truth, I don’t even remember the sound.  I do remember the mushroom cloud that leaped out of my little test tube.  It shot up until it hit the ceiling, at which point it started spreading throughout the room.  You know how everything seems to be in slow motion during an emergency?  It was like that.  I watched that demon cloud as it broke free, leaving its signature forever on my mind, indistinguishable from the nuclear bomb blasts we were taught to fear.

The reason I knew there was sound from the explosion was because my mom came racing down the stairs and directly to my workbench where I sat in stunned silence.  I knew I was in trouble.  I hadn’t exactly offered full disclosure on how I intended to use that saltpetre.  And I was pretty sure she wasn’t expecting it to be explosive.  I knew she saw every detail of my deception clearly written on my face.

Instead, she surprised me by asking me in a rather angry voice, “Have you been smoking?!”  What?  Smoking?  I was only 12.  Why would I be smoking?  That was when I realized she had seen all the smoke and drawn the wrong conclusion.  I leaped on the opportunity to give her an explanation other than the one she feared most.  I explained it was just a chemistry experiment.  I tensed for the possibility she might change tack and begin a new line of interrogation into what kind of experiment causes explosions, but after checking my workspace for cigarette butts, she was satisfied and left.

Now some people might consider this experiment a failure.  Not me.  I had proven that whatever it is they feed to farm animals and soldiers had great explosive power.  I just had to make sure to avoid the explosion part. 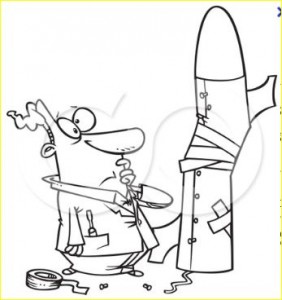 My inquiry soon shifted to another area.  What was I going to use for a rocket?  I certainly didn’t have any.  Anything made of plastic would certainly not work.  Rummaging through my dad’s workshop turned up an interesting possibility.  It was a cardboard tube about a half-inch in diameter.  This was perfect!  I had limited permission to use dad’s power tools, so I used the jigsaw to turn a dowel into a nose cone for my rocket.  I then taped it into place with electrical tape (none of that scotch tape stuff for us; my dad was an engineer and had all the good stuff).  The next problem was wings.  How do we make it go straight without wings?  I found cardboard on the back of a writing pad and cut out a triangle.  I knew the wing had to handle the high wind speed and high G-forces during the moments after launch.  So I used glue to hold my triangular wing in place.

Mixing up a batch of rocket fuel was easy, now that I’d perfected the process.  In fact, I made several process improvements by introducing a small pan that held 5-6 times more than my test tube.  My final improvement was the introduction of a small glass stick to stir the liquid (and reduce the chance of that combustion thingy happening).

As soon as I finished the cooking, I set the pan aside to cool.  Later, scraping out bits of the fuel, I poured the combination of nuggets and powder into my rocket’s body.  I was ready.  My rocket launch would be the first one ever seen on Crestwood Lane.  I called my friend Keith over to witness my proudest moment.

I had to prop up the rocket with twigs to keep it pointing upright.  And we had to use stones to hold the base of the rocket off the ground so I had room to get the match close to the fuel.  You might be thinking a smarter way to light a rocket would be with a fuse, but there were none in my chemistry kit, so I had to improvise.  It turns out the first few matches didn’t do the job.  The reason for this is every time I thought the rocket might be lit, I would break into a mad 100-yard dash for shelter.  Actually, none of the matches so far had started the rocket fuel burning.  And I was rapidly running out of matches.  Going back to Mom for more matches was not an option.  So I had to be strong, for the sake of the launch, and hold the match in place until ignition was confirmed.  Ignition, it turns out, is not shy about giving confirmation.  The only problem is ignition seems to turn almost instantly into launch, which doesn’t leave as much time as one would like to run away.

On this day, Dr. Goddard’s spirit was with us and everything went right.  Flames shot out of the bottom of the rocket, thrusting it upward.  It zoomed up and up, leaving a trail of smoke behind it as it made its ascent.  I admit it didn’t go perfectly straight; it actually seemed to do a lot of twisting and turning and a little wobbling, but it was close enough.  And when it had spent all its fuel, it turned around and fell to the earth.  It fell straight down (aided by the weight of the dowel nose cone and the wing).  It landed in the grass, with its tail sticking up in the air.  This was to be one of my best launches.

I was ready to run back to the basement and mix up more fuel, but it was not to be.  The little rocket’s butt was burned to a cinder.  In fact, we’d lost at least 3/4 inch off the length of the rocket because of the hot exhaust.  And the walls of the rocket where very thin in several spots.  It looked like the rule would be: one rocket, one launch. 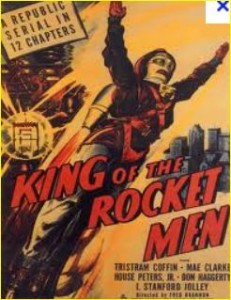 And thus began the adventures of the Rocket Boy of Crestwood Lane.

One thought on “Rocket Building 201”