Now, with all these design problems, you might wonder if I ever got it right.  I think it was Edison who said, “I haven’t failed.  I just know 1,000 ways it won’t work.”   Words to live by.  And, we did eventually get it right.  At least on one occasion.  And that was the last rocket I ever built. 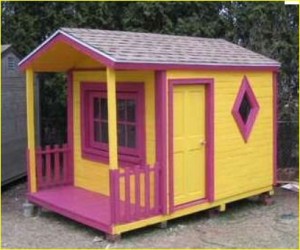 At this point, the only other kid with the guts to participate in my advanced research was Keith.  We never called him One-Match-Keith, but in his own way, he had courage.  He had his own chemistry set, and he had access to his sister’s outdoor doll house which we quickly converted to a mobile lab.  It was here we hit on the best combination of rocket fuel.

We used exacting standards to evaluate the quality of each new batch of fuel.  It consisted of breaking off a small BB-sized piece of the fuel, placing it carefully on a flat surface, and then lighting it with a match.  Our trained eyes would evaluate the intensity and the length of the burn.  Usually, this only lasted a second or so before everything was consumed.  Sometimes the fuel was so good, the pellet actually danced around while it was burning.  Those were the formulas we liked the best. 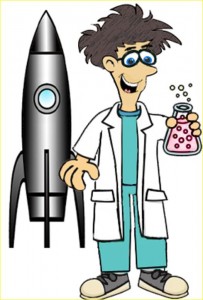 Then came the day we discovered the perfect combination of ingredients.  We knew when we finished the cooking process that it had potential, but it wasn’t until we gave it the BB-Fire Test that we knew what we had.  Instead of sitting still and producing a nice big flare, this little BB burned so hot and so fast, it launched itself.  It didn’t need to be in a rocket or anything.  It just flew.  And, since we were inside a 6 x 8 foot doll house, the flying BB bounced from wall to wall like a bullet.  Keith and I ducked and dodged that flaming pellet from hell.  Eventually, it was quiet.  When the smoke cleared out of the doll house, we examined ourselves for burn holes, but it seemed we had been spared.

Being the good scientists we were, we naturally repeated the experiment.  And sure enough, everything was exactly the same.  Even the terror and the mad scramble to get outside the little house were the same.  I am sure that little fire bug tried to hit us this time too, but he was going so fast it made it hard to steer, so he had to content himself with multiple ricochets off the walls, floor, and ceiling in the hope of winging us with a lucky shot.  He failed.

We smiled in triumph.  At last we had the ultimate fuel.  We had been working all summer to perfect this.  Unfortunately, we had taken no notes on the exact combination.  As perfect as it was, we only had one batch of it.  And if we added any common batch to it, it would only reduce its power.  So we resolved to save this for a special rocket.  One that was worthy of such an amazing fuel.  It wasn’t long before we found something. 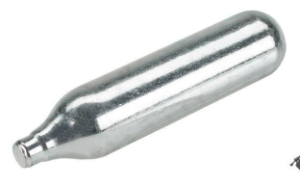 Now in our neighborhood, not all kids are the same.  I was a BB gun kid.  Some kids had pellet guns, which required you to pump up the air pressure for each pellet.  Keith was one of those rare kids who had a CO2 powered pellet gun.  When I saw that cool empty CO2 cartridge, I just knew you had to be able to do something with it.  Nothing this perfectly formed deserved to be thrown away.  That is when I realized it would make the perfect body for a small rocket.  It was made of metal!  And it already had a natural nozel built into the end of it.  And, if it worked out, we could get more of them very easily.  Perfect, perfect, perfect!

Now the wings were a bit of a challenge.  No cardboard wings would do for this bird.  We anticipated G-Forces that would leave cardboard wings standing on the launch pad.  We needed something stronger.  Back to dad’s workshop where we discovered a small triangle of sheet metal.  I had no idea how to cut metal, but then I realized it was the perfect size and cut already.  My eyes glistened.  Things were coming together.  But how do we attach this wing?  Elmer’s was not going to do it this time.  Although electrical tape was one of my dad’s favorite solutions (this being before duct tape was introduced), it didn’t seem right.  I considered soldering, but I wasn’t allowed to use the soldering iron.  I had heard of welding, but I was pretty sure if I wasn’t allowed to solder, I wasn’t going to be allowed to weld.  But then, as I was rummaging through my dad’s workshop, I chanced on a glue called Liquid Solder.  If there was ever a sign that I was supposed to stay on the path I was on, this had to be it.  I squeezed out some of that liquid solder, my only disappointment coming when I read you had to wait 24 hours for it to dry.  When you are 12, 24 hours is pert near forever.  But, when I reminded myself we were building the perfect rocket, I knew some things just couldn’t be rushed.

The next afternoon, the glue was dry.  Keith came over early.  We carefully worked our Ultimate Fuel into a fine powder.  We couldn’t use fuel chunks because the hole in the CO2 was only about 1/8 of an inch, so it had to be powder.  And, in yet another sign, there was just exactly enough powder to fill the rocket.

And when we went outside, we discovered the launch conditions were perfect.  Not a cloud in the sky.  No traffic on our street.  No kids anywhere near.  We set up the launch pad at the end of the driveway.  We pointed the rocket upward, tilting in the direction of the far end of the street.  All was ready.

And who should have the honor of launching this rocket of rockets?  There was no question really.  Only Rocket Boy, the foremost rocket scientist in this part of the country deserved such an honor.  I stepped forward, accepting my due, and pulled out a match to do what needed to be done.

Keith, always the smarter of us two, was standing at the far end of the driveway.  But I was fearless in this moment of my greatest triumph.  I reached down with the burning match.  The fuel was so amazing it took but an instant to light, surprising even me.  I didn’t even have time to run away before the rocket thrust itself into the air.  I watched it climbing higher and higher.  Soon it had gone higher even than our streetlight, which was a new personal best for any rocket I had ever built.  That is when it exploded.  I don’t mean “exploded”, I mean “EXPLODED”.  The sound was like a stick of dynamite. 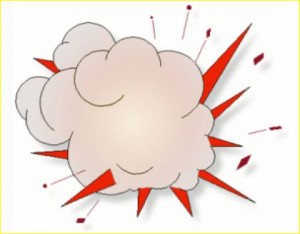 I stood there in shocked disbelief.  There were no little paper shards falling to the ground.  That thing was gone-gone-gone.  And with the force of that explosion, I was pretty sure it could have gone anywhere it wanted to go.  I looked around the immediate area to see if there was a hunk of exploded metal lying somewhere on the ground.  I didn’t see any metal shards, but I did notice Keith’s heels as he ran through the field toward his house.

Now, you might think a missing rocket would call up a Twilight Zone moment.  For me, it called up a Horrors on Haunted Hill moment.  As I wondered what could have happened to my rocket, how far it could have gone, and how much damage it could do, I knew with fatal certainty the only thing that could have happened.  That rocket was pointed in the direction of the Fonstein’s house on the far side of the circle.  I couldn’t see the house because it was 1/4 mile away, but I could certainly picture the hole in the side of the house and the 2-3 dead people inside.  I hoped I hadn’t killed all of them.  As I rechecked the flight angle, I realized my only hope was if they hadn’t been home at the time.  But it was close to dinner time.  Surely they would be home sitting at their dinner table, close together, where a single missile strike would get them all.  And what could I do?  It was too late to do anything. 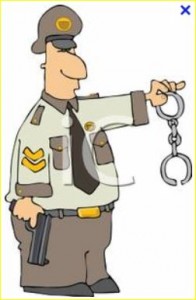 And so, I went into my house.  At best it might take a day before their bodies were discovered.  But after that it would be simple to calculate from the hole in the side of the house the direction from which the rocket had been launched.  I knew I needed to put my affairs in order.  They would be coming for me soon.  But I didn’t want to make it too easy, so I said nothing.  I just stoically awaited my fate.  When they came for me, I would calmly admit everything.  Through that night and all the next day, I waited.  Still they did not come.  Nor did I see any police cars or ambulances.  Nor did I see Keith, although I am sure he watched for police cars from his bedroom window.

By the second day, I dared to hope things might not be as bad as I feared.  Or maybe they had just not discovered the bodies yet.  I had to know.  So, filled with fear and trepidation, I began the long walk down the street.  All along the way, I looked for any sign that my rocket had not gotten that far, but I found none.  At last, I was in front of their house.  I looked up, afraid of what I might see, but as near as I could tell, there were no holes in the wall.  And I thought I caught a glimpse of movement from inside the house.  Could it be?  They had somehow survived?  A flicker of hope emerged.  And I cradled it like a precious flower. 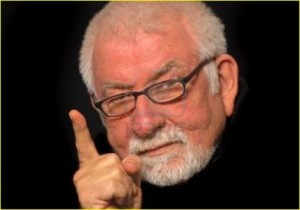 Now, years later, I can’t tell you why, but I never built another rocket after that.  Maybe it was because I became interested in girls.  Or maybe another hobby came along and displaced my interest in rockets.  But I think it was simpler than that.  I think there are times in your life when some cosmic force reaches down to give you a good emotional shaking.  Kinda like God’s way of saying, “What’s the matter with you?  Are you nuts?  Stop that!!”

This time I listened.