Perhaps you have heard by now of the Sky Lanterns that populated the night air above Pere Marquette Beach on August 5th?  You have not?  Well, let me tell the tale…

It was a night not much different from the night that started it all:  the night of the first Sky Lantern Incident (if you have not read that post, please read it first.)  Peg was the prime mover for this event, as she is for most things involving beaches.  It was to be another cookout on the beach, and Peg suggested we bring hot dogs, some extra firewood and maybe a few Sky Lanterns, just in case we felt brave.  This suggestion produced an immediate chill in my bones.  We had been lucky on our second sky lantern encounter, but Pere Marquette Beach was the site of our first near-disaster.  The place that almost marked the turning point of life as I knew it.

All day long as the beach party time approached, I had watched the wind.  The wind had proven on more than one occasion it was not my friend.  Several times during the day, I went out on my deck to observe and to measure its strength.  All day long it roared like a caged animal, frantically seeking a way out.  An email arrived from Peg saying she and Jeff were not going to bring their kayaks because wind and wave conditions were too bad for kayaking.  I knew the chances of finding a launch window in these conditions were poor.  But I brought the lanterns anyway. 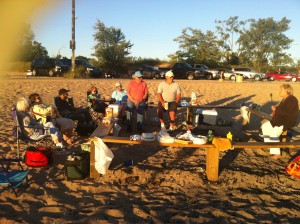 We began gathering at the beach for our cookout.  The group slowly came together.  Old friends and new.  Arriving in separate vehicles and lugging bags and bundles of goodies and folding chairs.  Eventually, hot dogs, marshmallows, corn, chips, salads, and other munchies were laid out on the benches for everyone to enjoy.

Jeff had taken responsibility for making fire.  He brought dry wood and twigs carefully selected from his back yard.  He then called on his Boy Scout memories and conjured up a magnificent fire.  He even created a special pit for his fire to protect it from the wind, and he lit it without the customary use of Boy Scout water (white gas or kerosene), which naturally made him the envy of every guy present.  It is a testament to his skill that the fire burned well.  It had to because the wind was still showing great strength.  On this occasion, we had two former Scout Masters (Steve H. and Dad), but with Jeff’s skill, no assistance was needed.  Our meals were prepared and consumed with great gusto.  Afterwards, things quieted down.  And we began our vigil.  The one thing no one had talked about.  The one thing on everyone’s mind.  The sky lanterns.  And would they fly again tonight?

As dusk approached, the wind seemed to quiet down.  The paparazzi began gathering.  There were at least 6-7 of them in plain sight.  They pretended to point their cameras at the sunset, but I knew why they were there.  They had obviously been tipped by someone that we might try this again.  Secretly, I wondered who among our ranks had betrayed us. 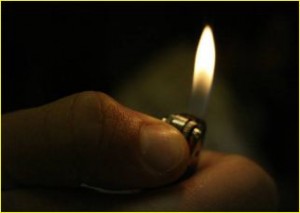 The absence of the wind was puzzling.  Peg performed several high-tech wind measuring maneuvers with her lighter which confirmed this observation.  I know at dusk the wind often changes direction.  During the change, there is a brief calm.  This might be the launch window we were seeking.  It might also be another vicious trick.

Someone said, “You really did bring the lanterns?”  The question was asked with some temerity, and I thought I saw a couple of people wince when they heard these words.  I said I brought four of them.  Ardis, the bravest of the lot, blurted out that she had forgotten to bring her rubber gloves.  Marge had apparently planned the same thing, but also forgotten.  For a moment, I wondered if they planned to drive home to get them.  Not wanting to lose any momentum, I went to the car to retrieve the lanterns.  I returned with the four beauties I had selected earlier.  At the fire pit, I carefully removed the wrappings and set them aside.  I could feel their eyes on me.

But the time was not quite right.  Before I could approve a launch, we had to await slightly more ideal conditions.  This time, we would not just light a match and see what happened.  This time we would consider wind speed, wind direction, visibility, proximity of innocent civilians, and other important things.  Slowly, things seemed to come together.  The only negative seemed to be the growing number of photographers who would record our every mistake and publish it on the internet for all to see.

When I announced it was time for the launch, I found we had doubters in the group.  They still remembered our first failed launch attempt.  They wanted a new location.  A place far away from the Coast Guard Station.  I found myself heartily agreeing with this suggestion, so we trekked down to the water’s edge and prepared our launch. 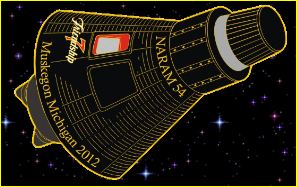 Jim and Dad and I had attended the National Rocket Convention in Muskegon earlier in the week, and I was full of inspiration.  We learned all kinds of high-tech terms like “Prepare for Launch.” and “3-2-1-Launch!” and “Ignition Failure. Wait 60 seconds and try again.” and the all-important “Watch Out!” and “Duck!” and “Run!!!”.   We knew so much more now than we had at the beginning of the summer.  Back then, we were rank amateurs; now we were highly trained professionals.  We knew all the necessary terminology.  And we even had a successful launch under our belts.  That is why we decided to up the ante.

At the last successful launch, we sent up each new lantern only after 1) confirming the prior launch was successful, and 2) waiting until each lantern’s fire had flickered out.  This time, we would do a sequential launch.  With this in mind, we numbered each team from one to four.

Now, you mustn’t think a sequential launch is easy.  It requires that all the team members know their jobs and be able to complete their tasks in a timely fashion.  And, truth be told, there were some among us who had not yet been part of a successful launch.  That was why when Cindy asked, “Are we going to let go all at once?”, I made an executive decision and said, “No.  We are going to launch them in sequence!”  I knew we had to do a successful sequential launch, before we could hope to master a simultaneous release launch.  (See how easy it is to come up with technical terms?)

Team One was on deck.  My two most seasoned veterans, Ardis and Jim, were ready.  It was a good decision to lead with them.  No words were necessary.  They knew what needed to be done.  I offered a quick light, and they did the rest.  They took all their launching experiences and used it along with all the natural teamwork that comes from decades of successful marriage.  The launch was so flawless that I forgot to take pictures.

Remember in the last post when I said Jim showed great management potential?  By now, he was our greatest expert on optimum release timing.  He could sense positive buoyancy in ways the rest of us could only imagine.  When Jim said it was OK to release, you knew your baby was going for the moon! 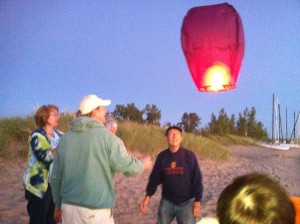 As I turned around, I found Team Two was eager to go.  Steve H. and Cindy boldly moved into position.  I admired them for their courage.  They had never seen a successful launch and had only their memories of our failed attempts just two months ago.  Yet they were ready.  I lit the fire and moved back.  I took up my camera as Jim moved forward to assist with the release.  They worked together quickly and efficiently like the great team they are.  And soon the second baby was adrift in the darkening sky.

Team Three, consisting of the LeBel family, was the least organized of the group.  Marge still seemed worried about fingerprints.  Dad was sitting this one out.  I was trying to take pictures.  Cindy, flushed with her victory from but moments before, came forward to help.  As the fire was lit, and the lantern began filling with hot air, I could see the mile-wide smiles on Marge and Cindy’s faces.  This was to be the first all-girl launch ever.  They were picturing their names in the Guinness Book of World Records, the world tours that would follow, the instant fame and notoriety, and the TV interviews.  Steve H. and I will probably never know how close we came to losing them that night.  Not surprisingly, their launch came off without a hitch. 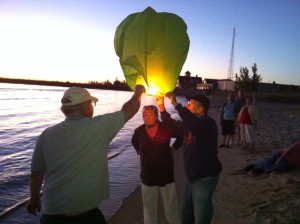 Team Four showed great initiative, and by the time I turned to evaluate and record their progress, Jeff and Peg had already achieved ignition.  It was quickly reported, however, that the wick was only burning on one side, and several attempts to achieve a balanced burn had failed.  Jim was brought in for a quick conference with the launch team, and they determined that if the release was delayed for a bit, they could still achieve a successful launch.  And that is just the way it turned out.  A launch to make anyone proud.

We remembered, somewhat belatedly, the lanterns were supposed to be sent up into the sky carrying a wish from the sender.  For me, I was too busy giving thanks for trouble-free launches to think of anything to wish for.  I hope others did better and their wishes come true.

And as I drove home that night, I felt the warm glow from work done well.  I also felt a slight quickening of my heart when I remembered the six lanterns that still remained in my closet…